The Education classroom in Phillips 210 has several pieces of equipment, all connected to a Promethean ActivBoard.  This equipment includes:

Touch input functionality should work automatically.  If the touchscreen isn’t responding, check that the USB cable is plugged into the three-way adapter. Without it, the touch input won’t be received by the computer.  Note that the touchscreen functionality doesn’t recognize separate displays–it will always behave as if they’re mirrored.  Find Calibrate in the Promethean menu:

It will only work while connected via USB.

To change the input for any other equipment, press the Input button on the underside of the monitor frame on the far right. 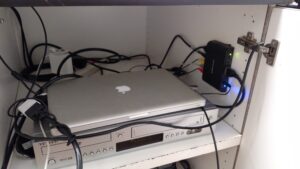 To switch between the MacBook (HDMI-1) and all other equipment (HDMI-2), use the Source button on its remote, along with the arrow buttons.  You might have to do this when you first start the MacBook. 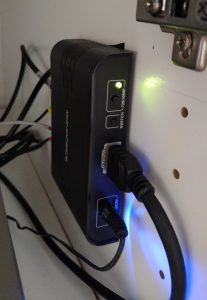 The converter, pictured on the right, has an input switch above the HDMI output cable. Pressing this button will toggle between the inputs shown below. PLEASE DO NOT UNPLUG ANY CABLES FROM THE CONVERTER. 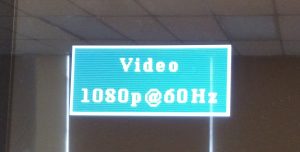 If you brought your own USB device, such as a flash drive, you may connect it to the black adapter.